Kennywood Postcards - Then and Now!

I have gained a small collection of Kennywood postcards within the last few years, so I thought that it would be a fun time to look back at a few of them! Some are older than others, but I like them all. I will also be attaching the back of the postcards when they have messages, as it's cool to read these impressions from the era... some are related to the park, but most are not. I got the oldest of these at a little transportation museum in the northwestern Pennsylvania countryside for only a few bucks apiece. I was thrilled to see a rack of old cards there, and the owner was once a Kennywood employee himself in the 1960s. 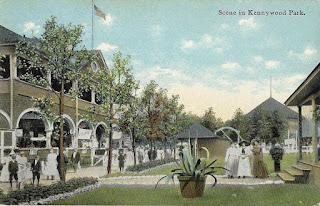 Let's start at the very beginning of the park's history. As the postmark below shows, this card was written in 1912!

Well, that tells us nothing about Kennywood, but given that this card was sent in February, who knows if the writer ever visited the park. The cool thing is that both of the buildings shown are miraculously still in the park today! The Parkside Cafe, then known as the Casino (though it was never a gambling hall...) is seen in the foreground. Here's the same side of that 1900 (!!) building now, although this is facing in the opposite direction compared to the view on the card. Both levels have been enclosed, but it's otherwise remarkably similar to back then. 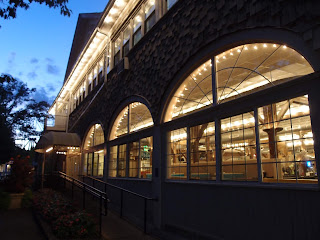 In the background, you can barely make out the park's original carousel building. This is the only park structure from Kennywood's opening year, 1899, still intact today. The first two Kennywood carousels were in this structure, but when the park gained its current, much larger model in 1927, it necessitated a larger building. The original pavilion then became a food stand.  Later, it was enclosed and turned into a Johnny Rocket's in 2014. 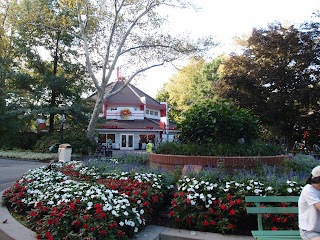 Next up is the massive Kennywood swimming pool, seen in this card postmarked 1938. From 1925 to 1973, Kennywood had this 350 x 180 ft pool, capable of holding 2.25 million gallons of water and 4,500 swimmers. Its large size led to excessive maintenance costs, causing the pool's closure after the 1973 season, when it was turned into a parking lot. It remained that way until 1995, which marked the opening of the 6-acre Lost Kennywood, a tribute to closed amusement parks through turn-of-the-century architecture and the largest expansion in Kennywood history. 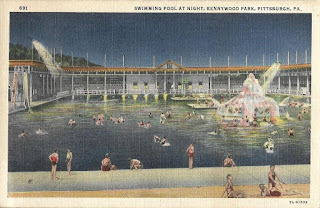 Kennywood included a rough replica of the pool fountain shown in this card when Lost Kennywood was built in 1995. 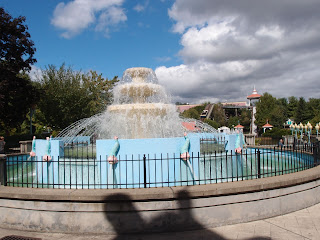 I purchased this card in one of the park's gift shops very recently, and it's a genuine old card. It has to be at least 25 years old, and I'm betting that it might be older. The Enterprise opened at Kennywood in 1978, and you can clearly see that from its decorations! 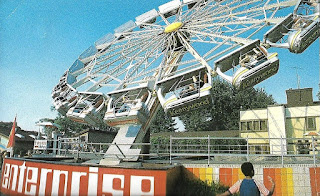 In 2003, the Enterprise became the Volcano when the surrounding area was lightly re-themed into "Volcano Valley." It was plagued with problems, though, and I only ever saw this model operating (and rode it) once before it was removed in 2016. That season, Kennywood received an identical model from Lake Compounce, one of their "sister parks," as they were removing theirs to add a coaster. It remains at the park now and is open every day once again. 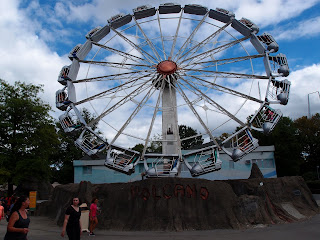 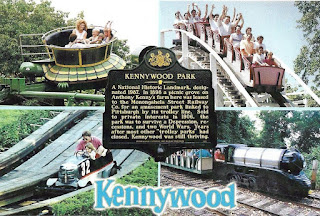 All of these attractions still operate, but the miniature train was turned into "Journey with Thomas" in 2018. The framework of the two locomotives was kept, but one was refitted.
On that note, I hope you've enjoyed this trip through Kennywood history!
Posted by Andrew at 5:30 PM 6 comments:

Email ThisBlogThis!Share to TwitterShare to FacebookShare to Pinterest
Labels: Kennywood 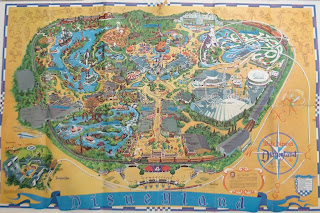 Today we're taking a look at my Disneyland Fun Map, copyright 1968. This style of map was sold in the park for years, and even when newer versions were released, they often built upon the base earlier maps such as this provided. It was drawn by Sam McKim, the master of this type of souvenir. Anyway, let's take a closer look at what's pictured! I apologize for the okay quality of these images, as I wasn't up to try and piece together larger pictures with our tiny printer scanner! 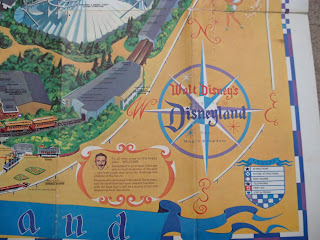 Just as almost every similar map ever produced, there's a transcript of Walt Disney's opening day speech and a great old-school variant of the familiar Disneyland logo in the bottom right hand corner. 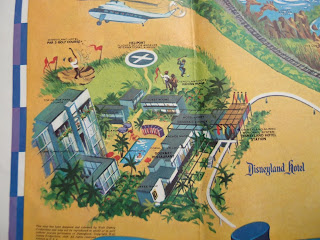 Before we enter the park, take a quick look at the Disneyland Hotel. You can ride the elevator to the Top of the Park lounge, play several types of golf, and even ride a Helicopter to and from LAX! 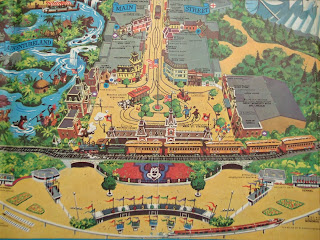 The old arrangement of the entrance leads straight under the train station and into Town Square. One of the many minute details is the trains of the Disneyland Railroad, which are all labeled by their names and function (in this case, "passenger train"). 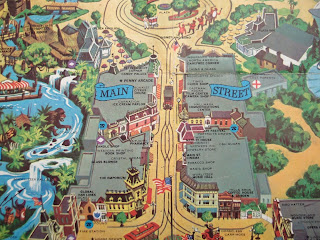 Journeying up Main Street, USA, we get an accurate listing of all of the shops present during the era. I like how the more important listings are bolded (hence Candle Shop vs. Silhouette Studio), and attractions, like the Main St. Cinema, get a star by their name. 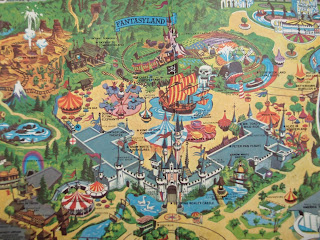 Sleeping Beauty Castle is nicely lined up with the Chicken of the Sea Pirate Ship, but the King Arthur Carousel and Mad Tea Party have been slightly rearranged for some artistic license. There's also no Big Thunder Trail at this time. 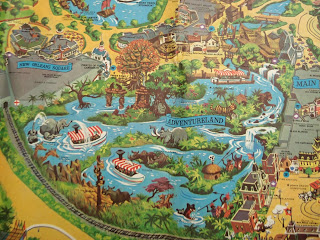 Moving to the left at the Hub, we come across the Jungle Cruise. You've got to love the boats with their festive, striped canopies! In the Adventureland shopping area, iis really a shame that the "Big Game Shoot" has gone to Yesterland. :-) 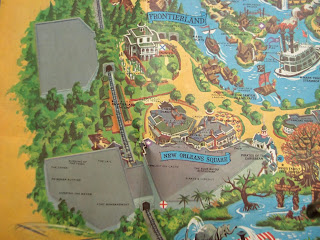 Pirates of the Caribbean and the Haunted Mansion are two of the most interesting components on this map, for the reason that they show the attraction "show buildings" in the proper location behind the railroad tracks. The Haunted Mansion is marked with a blue X as a "future attraction," but Pirates has all of its scenes labeled. 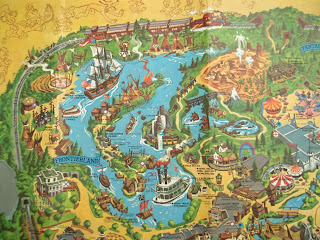 Panning out a bit, we see the grand expanse of the Rivers of America. There's also Nature's Wonderland in the upper right, and you can really see how the waterways of both areas were connected here. Still, though, you have to appreciate the extensive labeling, right down to "Catfish Cove" on Tom Sawyer Island. I understand that some of the earlier maps went even more in depth! Check out the neat line art and Indian Village. 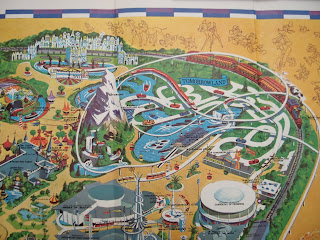 We've already glimpsed Fantasyland, so let's jump across the park to Tomorrowland. The second of the two "future attractions" on this map is the "Spaceport and Rocket Flight," which of course evolved into Space Mountain. But unlike the Haunted Mansion, this process was over a much longer period of time, as Space Mountain didn't open until 1977. 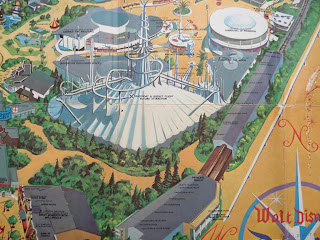 Here's the rest of Tomorrowland. There are some slight differences in this upper corner of the park today: the Motor Boat Cruise and Skyway have been lost, along with the Fantasyland Autopia. The Peoplemover also isn't running to tie everything together any longer.

These souvenir "Fun Maps" are literally so cool, and I wish that all theme parks had artists on hand that could have designed something like this. I can say that I, for one, would be able to pour over them for hours, especially if they included such a sheer amount of detail as this one. 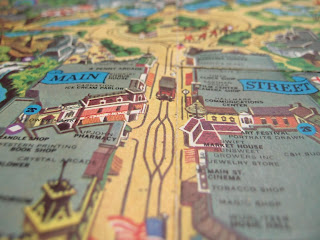