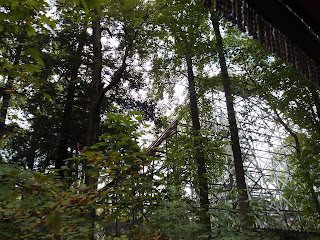 Conneaut Lake Park has been a huge part of my life. While Kennywood has always been my "home park," Conneaut is only about an hour away from me. In 2013, I made my first visit in September and returned in the fall of 2014 and 2015. The most memorable thing about these visits is that the park was completely dead on these weekends. I thought that it would be interesting to show some pictures of a surreal, desolate amusement park.

Conneaut has low prices (given its few attractions), and on the second Sunday of the month, they've traditionally sold $5 wristbands. I've been on a summer $5 day twice, and the atmosphere then is the complete opposite of these pictures. Just take a look: 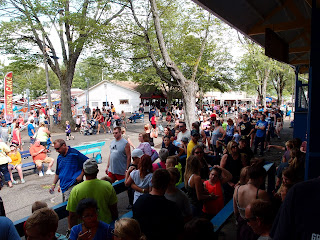 However, the first time my family visited, we got $5 admission for bringing a used coat! 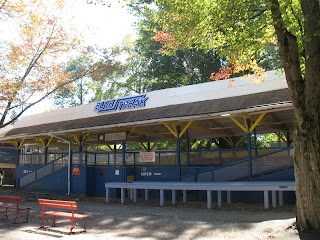 There are several unique rides at Conneaut Lake Park, but the star attraction is the Blue Streak, a 1938 wooden roller coaster that is one of my favorite rides. The best thing about this coaster is the way it is buried in the woods, so it might require its own post in the future! 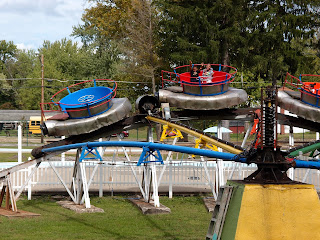 The other two unique rides at Conneaut are the Tumble Bug, one of two left in the world, and the Devil's Den, a gravity powered darkride, meaning that it is more like a roller coaster, with a chain lift and a small drop to give the car momentum. Pretty much every US park in the early 1900s had a Tumble Bug, but now the only two are in Western Pennsylvania! 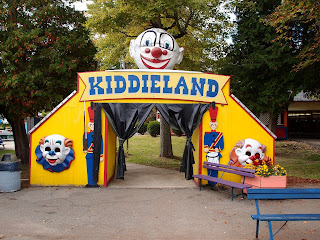 The history of Conneaut over the past 25 years has been a roller coaster itself, so hold on tight! 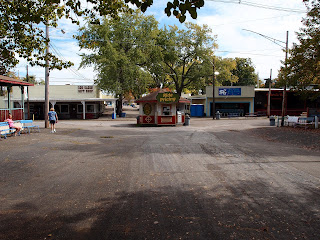 Conneaut almost closed prior to the Great Depression, but the state of the economy meant that redevelopment plans for the park fell through. After several decades of successful operation, plans were announced at the end of the 100th anniversary in 1992 for the park's rides to be removed or demolished, moving the focus to a family entertainment center. (Happy 100th...) There was an auction of all of the park's attractions, but local businessmen bought many of the rides and later purchased the land, keeping Conneaut alive. 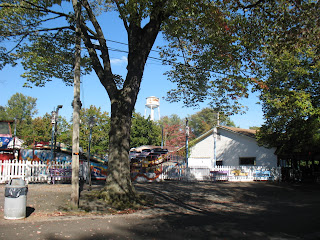 The park lost money under the new ownership and closed in 1995. Reopening in 1996, Conneaut Lake continued to try unsuccessfully to find its footing. In 2007 and 2008, the park remained shuttered. However, most of the rides reopened in 2009, with the Blue Streak following in 2010.

In 2014, Conneaut Lake Park's growing debt caused them to move toward a Sherriff's Sale. I didn't realize the severity of the situation at the time, but I now see that Conneaut came very close to finally closing forever. However, the park filed for bankruptcy and made improvements in their debt load through last year. 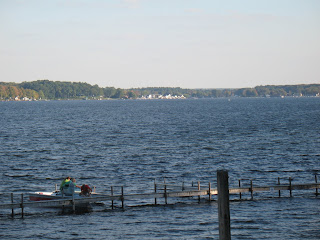 In late May, Conneaut the decision to cancel their 2020 season, citing that their "business model has been built on a crowded midway" and the open nature of the park's borders meant that it would be difficult to regulate attendance. Most other amusement parks in Pennsylvania did open this summer, so I do wonder if Conneaut called the summer off a little prematurely, especially with the park's precarious financial situation. I can only hope that they will open next year. In a way, Conneaut is a "zombie park" that has refused to die!

The Kangaroo opened in 1962 and was the last of its kind in the world. Known as a "Flying Coaster," this was the ride I thought of when I had to name a ride that everyone loved and made people happy the most. I had not ridden the Kangaroo since 2016, but like all of these attractions, I am blessed to have experienced it as much as I did. 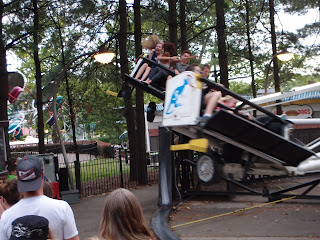 There have been four Bayern Kurve rides at Kennywood since the first debuted in 1968. This model came from Miracle Strip Amusement Park in Panama City, Florida in 1994. It lasted ten years before being removed for refurbishment from 2006-2008; the Kurve came back in 2009. (Kennywood was sold to its current owners at the end of 2007.) 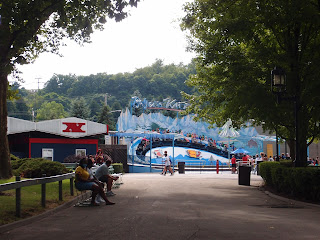 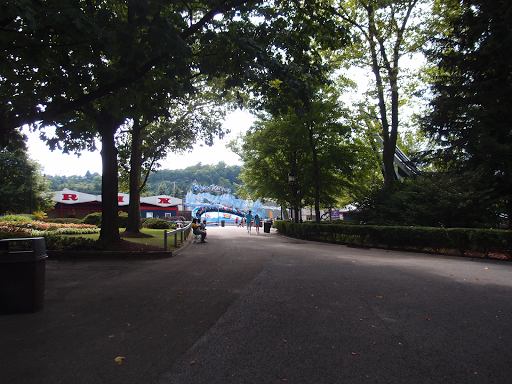 For those not familiar, the Bayern Kurve had a unique motion where the cars tilted to bank with the track. Although it was a rough ride, its loud horn made its presence heard from literally every corner of the park.
The last Bayern Kurve in the US is at California's Great America, but it runs slow compared to Kennywood's and lacks all of the European decorations. 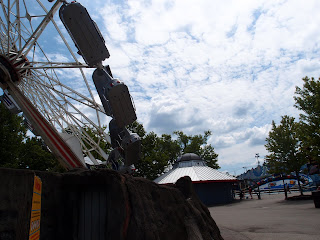 Kennywood had an Enterprise ride (made by HUSS) on this plot starting in 1978. In 2015, it was replaced with an identical 1986 ride from Lake Compounce in Connecticut, one of Kennywood's sister parks.
Paratrooper, opened in 1976, was the third ride of its type at Kennywood. It sat adjacent to the Kangaroo. Like the Volcano, there are still quite a few Paratroopers across the country, including one at Idlewild. 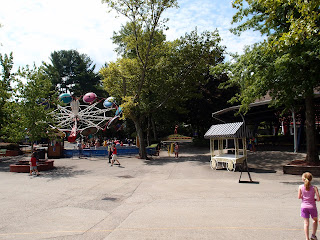 On another note, the Eli Bridge Ferris wheel at Idlewild, an hour away from Kennywood, is also getting removed. Although this is not a rare ride like the Kangaroo and Bayern Kurve, it used to be at Kennywood, and it gives Idlewild a net flat ride loss of three when combined with those lost over the past few years. 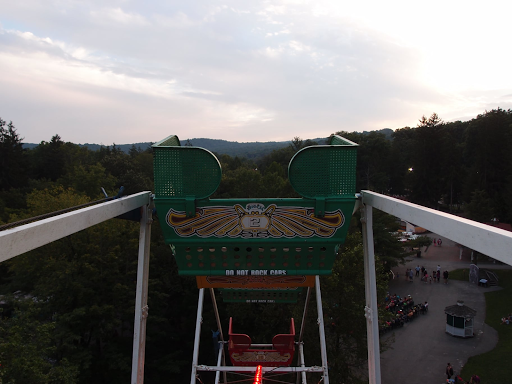 This picture is from my first ride on the Bayern Kurve in 2013. I guess that my blog can just as well now be called "empty plot blog." 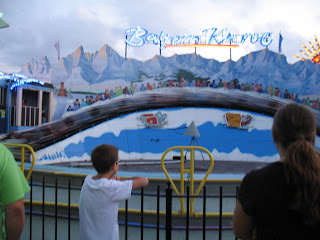 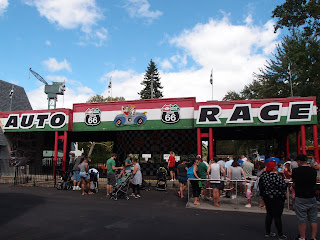 The Auto Race (then known as the Auto Ride) opened at Kennywood in 1930. It was designed by Harry Traver, the mastermind behind the Tumble Bug ride and some of the most extreme wooden coasters of that 1920s "golden era." Today, the Auto Race is the last of its kind in the world. The ride's facade has an animated, neon mural. The flashing wheels are neat... when they work. The below picture was taken more recently following a repaint. 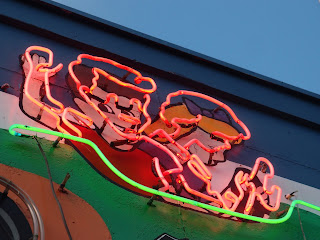 It's inevitable to compare this 1930s car ride to the type that popped up at parks all across the country in the vein of Disneyland's Autopia. Kennywood actually added a steerable ride of that kind called the Turnpike in 1966 (with no gas pedal). However, it closed after 2009 for a new roller coaster. As far as the Auto Race goes, its cars run through a wooden trough and are powered electrically. 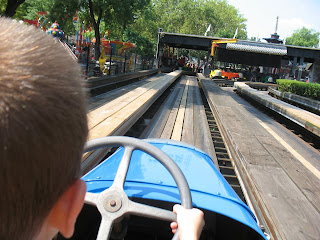 It's great that the Auto Race still exists, but sadly, is not as good as it used to be. Kennywood, citing their desire to preserve the attraction, now has the cars go about 10 miles per hour compared to the 20 mph or so they went before 2014. 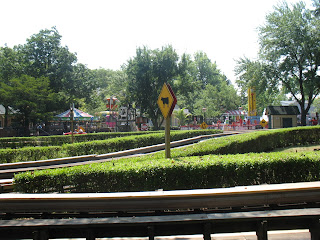 The 2014 update also resulted in a computer system to keep track of where the cars are on the track. That is what the "bumps" on the sides of the trough (not seen in the above picture from 2012) are for. 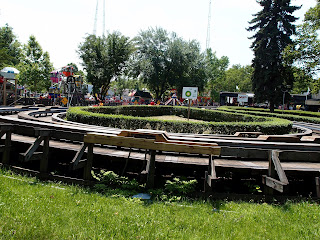 One last fun fact: the cars' numbers are based on local highways, though there is no question what the "98" here recognizes: Kennywood's founding year of 1898. (Though they opened in 1899, you see "est. 1898" emblazoned everywhere.) 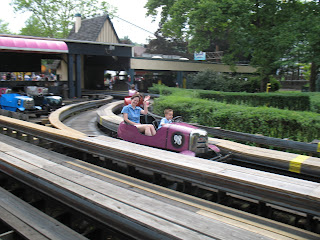