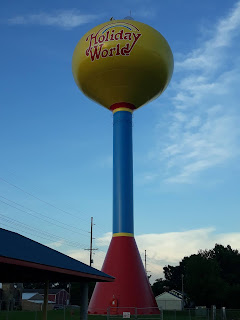 One of the new-to-me amusement parks I got to visit this summer was Holiday World in Santa Claus, Indiana. Opened in 1946 by Louis Koch - whose family still operates it today - Santa Claus Land was conceived when Koch realized that there was no place for children to go to see Santa Claus in the whimsically-named town (so called because there was already a Santa Fe, IN). 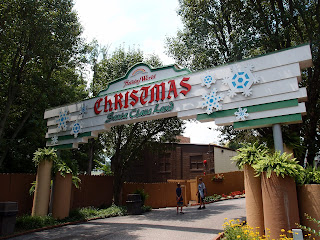 Today, the former Santa Claus Land area serves as the park entry plaza but does not contain any major attractions. 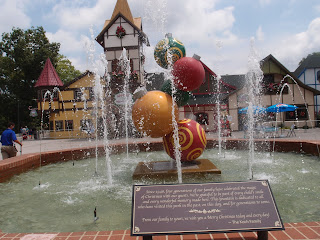 In 1984, the park was given its current name and expanded beyond the scope of Christmas to cover the Fourth of July and Halloween. 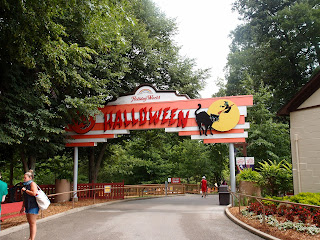 In 1995, Holiday World put itself on the roller coaster map by installing Raven, a wooden coaster in the Halloween area of the park. Although a ride on a smaller scale, I was still greatly impressed by this coaster and its wooded setting. 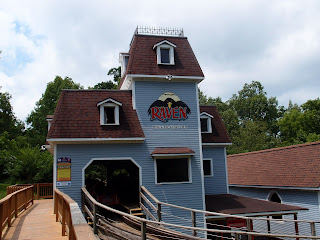 Along with the "Scarecrow Scrambler," the Hallowswings is a lavishly decorated Wave Swinger. 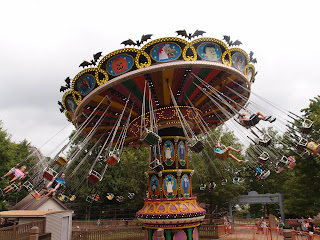 The Legend is the other wooden coaster in the Halloween area, and it opened in 2001. This was another spectacular ride that took me off-guard. It's currently my fifth favorite wooden coaster. 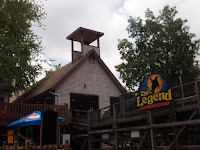 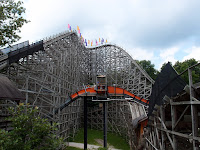 In 2006, Holiday World opened its largest expansion yet, a new Thanksgiving-themed area of the park. 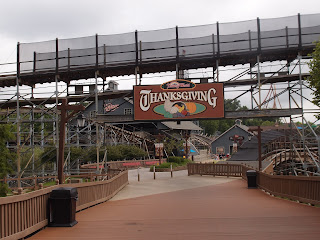 The Voyage is the park's main attraction, and I had high expectations for this ride. I wasn't disappointed, as this 2006 ride - the second longest wooden coaster in the world - is now my favorite roller coaster. 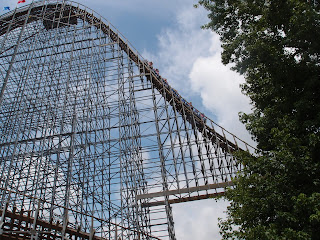 The Thanksgiving section also features a shooting darkride called "Gobbler Getaway," in which you have to "call" (not shoot) turkeys that have escaped. But as you can see below, in the end, everyone just has pizza instead. 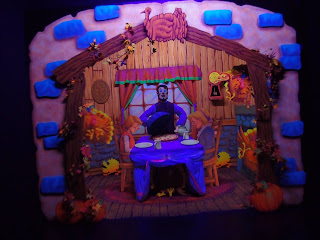 The park's next major expansion was in 2015 with the Thunderbird coaster in the Thanksgiving area. This is a wing coaster, which means that the seats are cantilevered out to either side of the track. (It was also a ride made for social distancing!) 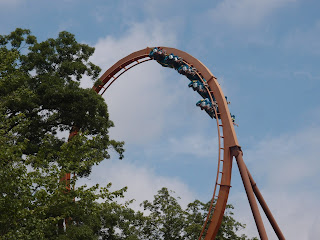 The last themed area in Holiday World is the Fourth of July, which is home to an assortment of typical flat rides. This was a park that I had wanted to visit for many years, and despite the less-than-ideal circumstances this year, I still enjoyed Holiday World and its three wooden coasters!
Posted by Andrew at 1:11 PM 6 comments: 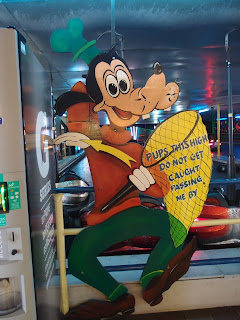 Yep, that's Goofy holding a fishing net, ready to catch a child. The place is Trimper's Rides, in Ocean City, Maryland. The building that houses this park's 1902 carousel is home to many kiddie rides with artistic flourishes, some of which are quite interesting - let's take a look above this pelican trash can, for instance. 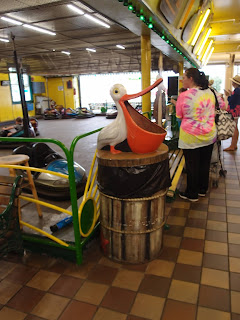 I wouldn't trust The Big Bad Wolf with that oil can. He could cause an accident. 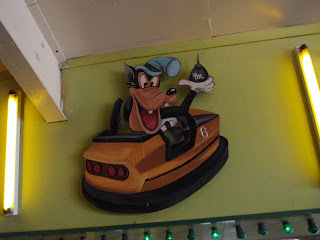 Mickey is dressed like Mr. Toad, complete with goggles. 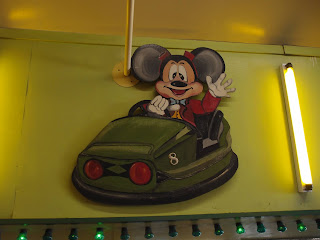 I don't think that this is Dumbo... 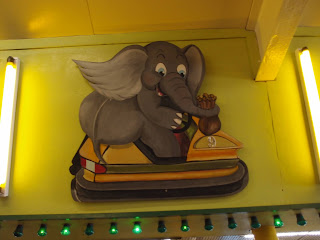 Donald gives the Trimper's kiddie bumper cars a THUMBS UP and a FOOT OUT. 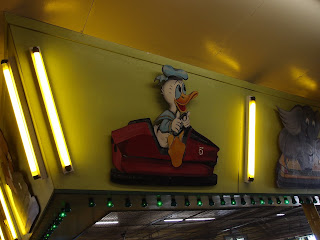 Meanwhile, one of the Three Little Pigs is eating some cotton candy that's not even as big as his behind. 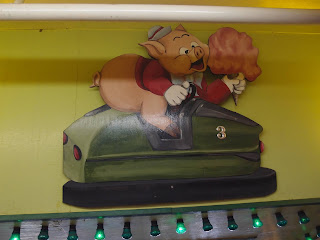 Although it's not Disney, this Popeye cartoon is worth a mention. I don't have a picture of the other side, sadly. Trimper's has to be one of the smallest parks in America that still retains a park artist, at least as of last year. 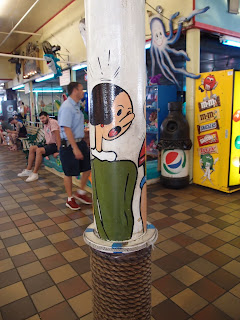 I mainly wanted to write this post to share the pictures of Trimper's, but here're a few bonuses. 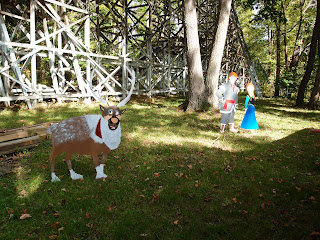 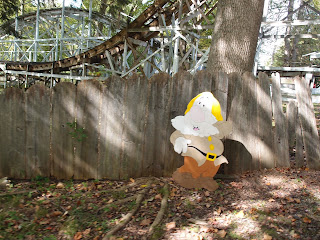 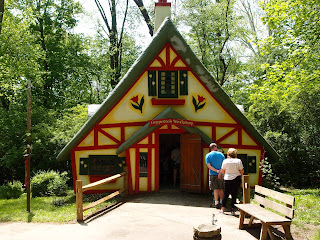 The "Enchanted Forest" outdoor walkthrough-style attraction existed before Disneyland opened, but many of them contain Disney knock-offs. Story Book Forest at Idlewild in Ligonier, Pennsylvania, keeps mostly to safe ground on the majority of their fairy tales. Pinocchio is the one that I do see some direct references in. Look for Figaro, Cleo, and a copy of the book in the film's title sequence. Here's a video clip:
With the Disney theme parks being the successes that they are, many attractions have been based on their design at regional theme parks. Most are significantly reinterpreted, but you will also see things that leave no question where the idea came from. Take the "Country Bear Jubilee," which has some of its old (non-functioning) animatronics in the park history museum at Knoebels, for instance... 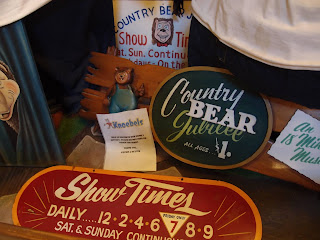 Not nearly as endearing as Henry... 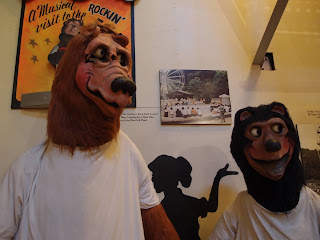 I'll end this post with a picture of Kings Island's International Street. With the park entrance leading straight into this area, it's obvious that Disneyland and Magic Kingdom provided inspiration. In fact, Bruce Bushman worked on the design of the street, making it one of the more appropriate examples of a Disney influence. 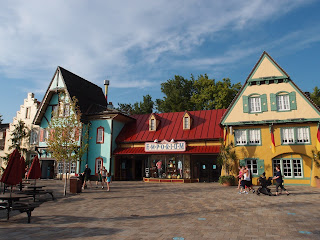