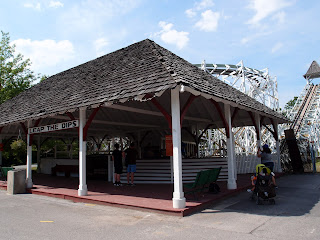 Built in 1902, Leap the Dips is the world's oldest roller coaster! Located in Lakemont Park in Altoona, PA  (home of the Horseshoe Curve), I have been aware of it for years but just this year have gotten the opportunity to ride it. Roller Coaster DataBase lists its status as follows, with "SBNO" meaning "Standing But Not Operating." 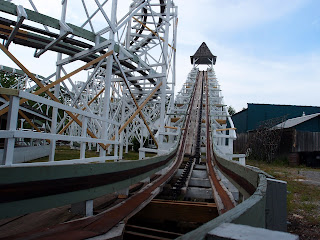 As you can see, Lakemont Park and especially Leap the Dips have had a rocky history. Lakemont was announced to be closed in 2017 to undergo a rebranding, but that closure stretched through 2018, and when the park did reopen in 2019, Leap the Dips remained closed for the whole year. Luckily, though, as soon as Lakemont reopened for 2020, Leap the Dips was back up and running for the first time in four years, sporting a fresh coat of paint and riding better than ever. 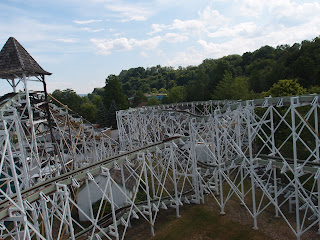 As soon as you board the car, you realize that this is a coaster from a different era. There are no seatbelts, and the only restraint is a lap bar fixed to the car. It's impressive that they were able to reopen the ride and keep such simple restraints. Seen below is the storage shed where the unused cars are kept. 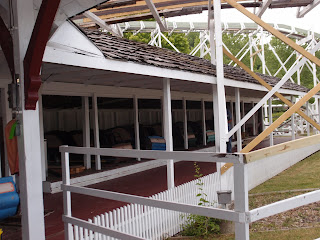 Leap the Dips is the last "Figure 8" coaster left in the world. At the turn of the 1900s, there were more than 300 of this model of coaster across the country, and any park worth its salt had one. However, they were proved obsolete by the golden age rides of the 1920s, and I'd guess that only a handful was left by 1950. 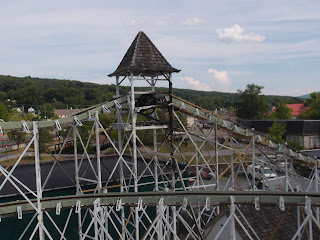 Leap the Dips is in a unique position in that the park fell on such hard times that they didn't have the money to tear the old coaster down during the years it sat closed. It's a case of lack of funds actually saving a coaster instead of spelling its doom!

The dips are all on the smaller side, never reaching heights of more than 10 feet, but Leap the Dips is surprisingly wild and throws you out of your seat more times than you would expect when looking at it. 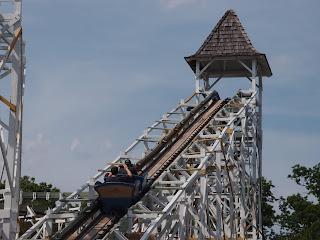 Lakemont Park has one other wooden coaster, the Skyliner, moved from a park in New York in 1987 when the Boyer candy company attempted to rebrand the property as a large new theme park.  This turned out to be a huge fiasco that Lakemont has never completely recovered from.

Leap the Dips holds a solid place as part of the "new" Lakemont Park, so hopefully, it will be gently thrilling riders for years to come. 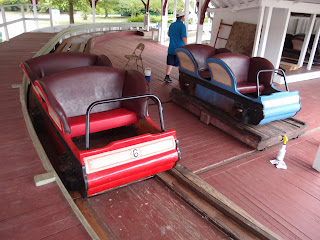 It was also my hundredth roller coaster. :-)
Posted by Andrew at 6:08 PM 7 comments:

Another Spin on the Knoebels Roto-Jet

I did a post on the Roto-Jet at Knoebels in central PA at about this time last year, but I just took a few more pictures that I think you'll enjoy. If you don't remember, this Roto-Jet came from the infamous Freedomland USA. 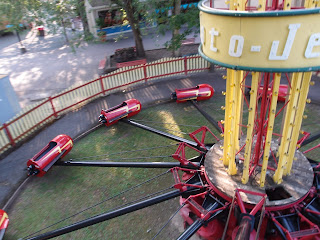 Since Knoebels attendance has been very light lately, I was the only one riding during this cycle. 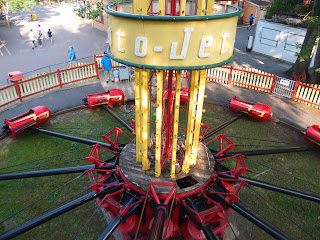 The plus side of a solo ride is that you can take unique shots like this! 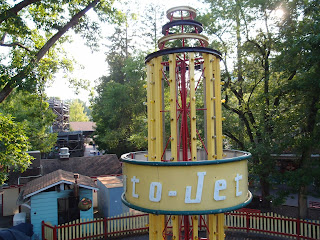 My Dad and I went to Hersheypark on this same day, and they also have a Roto-Jet, the one from Pontchartrain Beach in LA. (I forgot to take a picture.) I've never been on that one before, but it no longer has the classic ride vehicles the Knoebels model has. 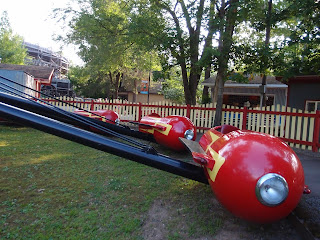 I first rode the Knoebels Roto-Jet in 2016, and I was expecting it to be a Dumbo-like ride. I was pleasantly surprised at how intense it is! The lateral forces you get when you're spinning around in the down position are hard to beat. 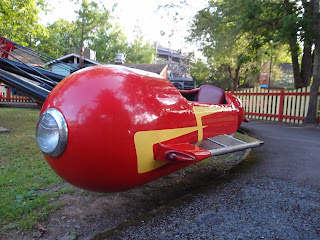 It's nice to know that even in 2020, you can still ride classic flat rides maintained immaculately well like this one. 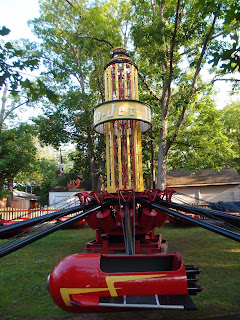 I'm glad that I got to visit Knoebels and Hershey when I did. Who knows what the rest of this season will hold for the PA amusement parks?
Posted by Andrew at 11:01 AM 5 comments:

This is a toy I got for Christmas years ago. I was weirdly fascinated by it and convinced my parents to buy one on eBay for me. It wasn't very expensive, and it looks like you can still buy one for cheap now! Overall, this playset is an interesting representation of the park that takes some liberties but is overall more faithful to the real layout than toys made now. As the logo states, it was a Sears exclusive. This is the box that it came in. 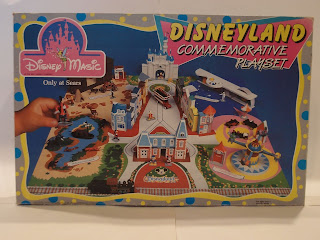 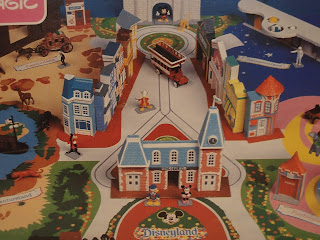 The set is made up of a mat with plastic figurines and objects on it. 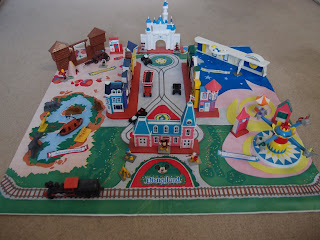 My favorite building of the set is the train station. The modern Disneyland logo in the flowers seems to recall Nara Dreamland... and yes, that is a Keel Boat in the Jungle Cruise! 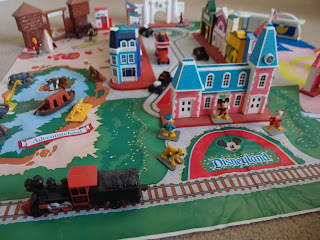 The main street buildings are not in the right position, but this block's architecture matches the park. You can see the Candy Palace on the right, and I give them accolades for including both the Crystal and Penny Arcades! :-D 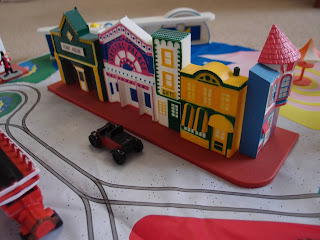 The left block doesn't seem as accurate, but they have a "Juice Bar." The purple coloring of the building seems to suggest grape juice, but with the Welch's stand being in Fantasyland, this should probably be the Sunkist Citrus House. Yep, I was thinking about this in fifth grade. Note the omnibus! 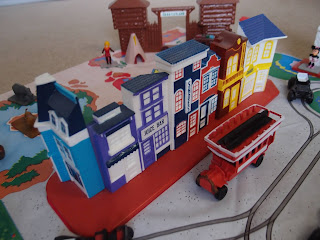 Like all of the structures, Sleeping Beauty Castle is a shell that weighs almost nothing. 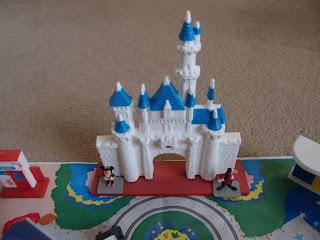 Adventureland's only attraction is the Keelboat Cruise. I mean, there's no Rivers of America, but still... 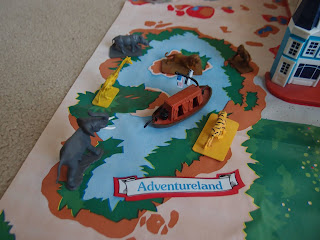 Frontierland has the stockade, a teepee w/ Indian, a sheriff's office w/ sheriff, and a wagon with a crooked horse from being kept in an attic (not mine!). 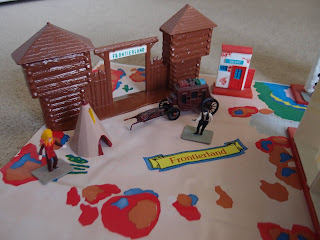 Obviously, Fantasyland isn't behind the Castle. Dumbo, which spins around, has a capacity here that rivals the Haunted Mansion. I'm not sure about the antique cars included. I put them on Main Street, which makes the most sense, but the box has them in Fantasyland. It's supposed to be Mr. Toad, I guess - but they look nothing like that attraction's ride vehicles, past or present. 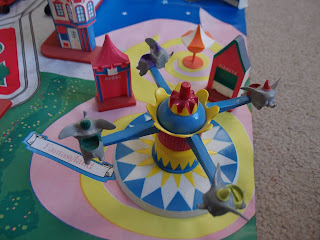 Tomorrowland, like the park at opening, is the most spartan. This building has always interested me. I've seen it at least once on old ephemera (which I can't find now), but I'm pretty sure that it was never in the park in real life. The souvenirs that I saw looked to be from the 50s or 60s, too, so I find it weird that they would include it in a toy made in the 80s. 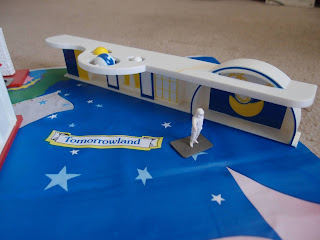 I keep this on a shelf in my closet and hadn't pulled it down in years. I enjoyed looking at it, and I hope that you did too! Thanks for reading.
Posted by Andrew at 3:34 PM 6 comments: