After 16 seasons of operation, Kennywood's corny Garfield's Nightmare boat ride has been restored to a theme reflective of its past! The much-anticipated ride hits all the right notes for a darkride, and it feels a million more times like a classic darkride than Garfield's Nightmare ever did. This is my review of the newly rethemed attraction. (If you're unfamiliar with the story of the Old Mill and the ride theme it replaced, I wrote a post back in March about it.)

My first impression of the entrance was that it had been opened up and is now free of the souvenir and food stands that cluttered it during the Garfield years. 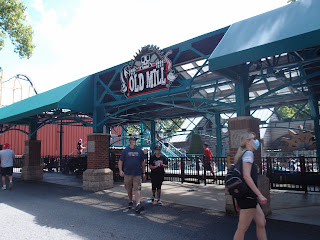 It's a shame that they didn't bring back a version of the old 1920s-style Old Mill front, but I'm not going to complain because having a century-old ride at all is so much better than not, and updating any vintage ride to an old-school theme is just the most awesome thing to do. 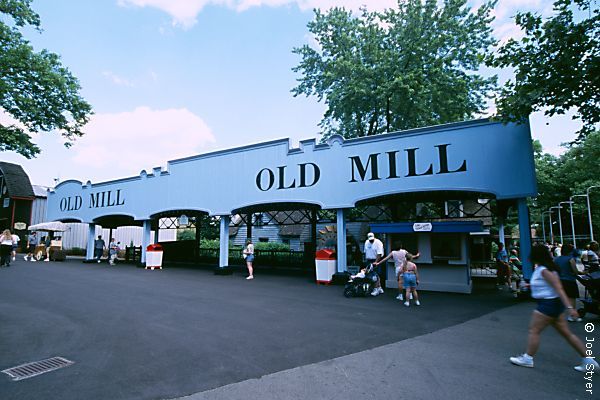 It was only in March that the retheme was announced, and despite a months-long shutdown at the park, the people that designed the new theme (the designers of a famous Pittsburgh haunted house) were able to work together at home and online, so by the time the park opened in July, the "new Old Mill" was ready to go! 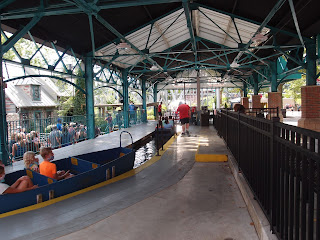 The facade remains unchanged from Garfield apart from a new skeleton in the window. 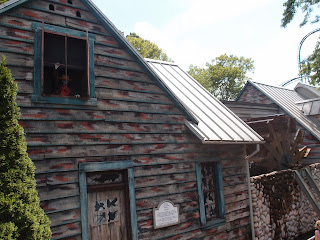 While Garfield's Nightmare was not universally hated among park visitors, those outspoken about desired changes at Kennywood always cited it as their no. 1 attraction to bring back (and you would certainly hear a long list of others if you asked certain long-time Pittsburghers, who are known for being resistant to change.) 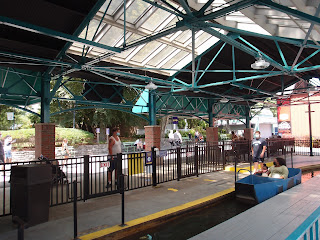 I'm not going to leave comments on every scene but will tell you some fun facts. 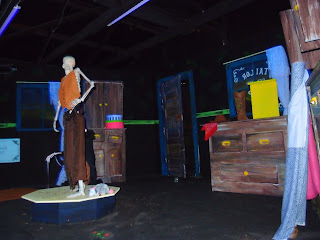 The "Hoot N' Holler RR" sign in the background of this diorama is a tribute to the old "hillbilly" theme of Kennywood's miniature train ride. (now it's Thomas...) The train itself is from a former darkride at the park called Gold Rusher that closed in 2007. Reusing props like this is cost-effective yet will surely bring back memories of the past for many. 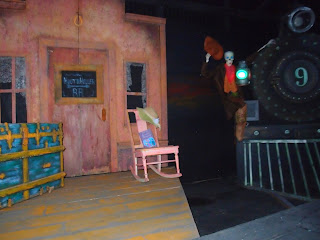 Another former Gold Rusher prop are these coyotes, who are static. The motion in this scene is provided by the ghostly blacksmith in the next picture, a replica of a gag from the 1974-2003 Old Mill. 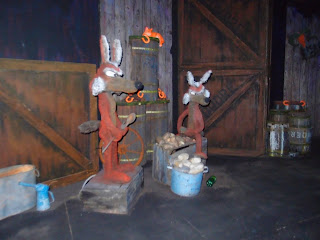 Notice the orange cat in the background. I'll let you make that connection for yourself. :-) 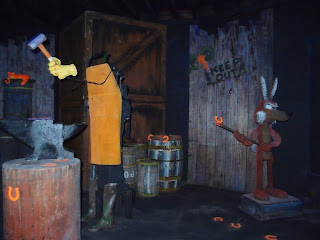 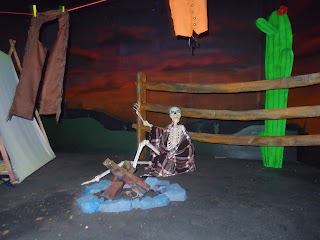 There is very simple animation in every scene; the clothesline bounces up and down, and the water runs from the pump, but there are plenty of details and references to old park rides that will make you want to ride again. And remember, these scenes are very dim in person, so you don't necessarily notice the simplicity of the construction. 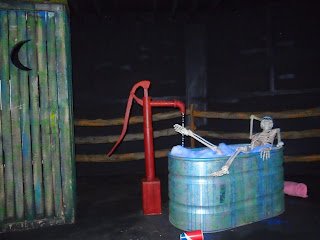 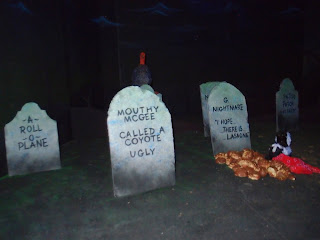 The name of the main skeleton in all of the scenes is Harold, which is a shoutout to a former name of the Old Mill, Hardheaded Harold's Horrendously Humorous Haunted Hideaway. (longest ride name ever?) 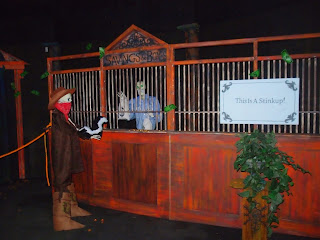 Going through, I couldn't help but think that despite having a brand new theme, this actually feels like the oldest of Kennywood's three darkrides. 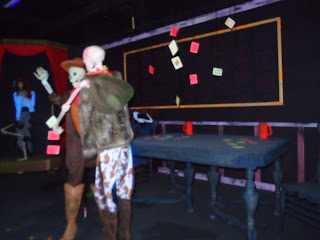 The Old Mill is not elaborate and may seem crude to many, but that's exactly the vibe that most classic darkrides give off and is a huge part of what makes them charming. Those going in expecting to be wowed or terrified will be disappointed, but if you temper your expectations to expect a simple boat ride through the dark (thankfully without neon colors on every surface), then you will surely enjoy it. 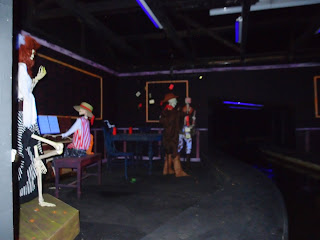 This is the Old Mill that I knew we needed all along, and I'm sure that it was an inexpensive move for Kennywood that has gained them lots of publicity. 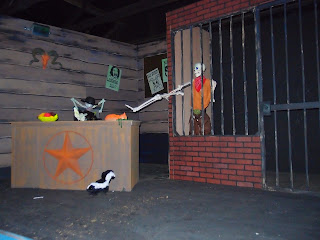 Here's the scene in the pre-Garfield ride that this tableau is a tribute to: 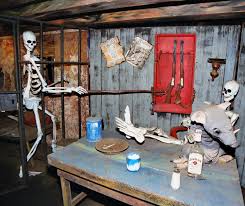 Overall, the Old Mill is a great addition to Kennywood's storied darkride legacy! 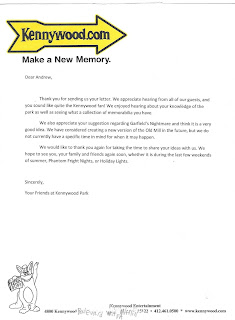 To end this post, I've scanned a response to a letter I wrote Kennywood in 2012 asking them to bring back the Old Mill. Eight years later, they finally got around to it. ;-) (My "fix" of the address at the bottom was because it came off when I removed the tape that was holding it to my wall.) :-p
Posted by Andrew at 4:53 PM 6 comments:

I got to visit Kings Island in Cincinnati, Ohio at the end of July for my first ever visit. Even with all of the virus precautions in place, I still had a great time despite all of the rides being closed for a couple of hours early in the day. Crowds were light, so I was able to ride every coaster multiple times that I wanted to. 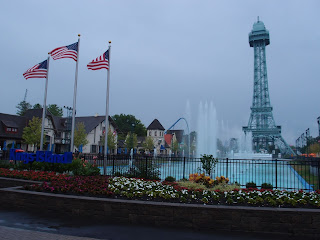 Opened in 1972, Kings Island has a long history, starting with a park called Coney Island located elsewhere in the city that was majorly successful. However, due to its location on the Ohio River, the park was moved to higher ground and rebranded into the new theme park of Kings Island in 1972. The park also served a stint as Paramount's Kings Island that saw the installation of several lightly-themed attractions before Cedar Fair bought all five of the Paramount Parks in 2006. The entrance leads into International Street and the iconic 1/3 scale replica of the Eiffel Tower. In the background, you can see the new Orion "giga coaster." 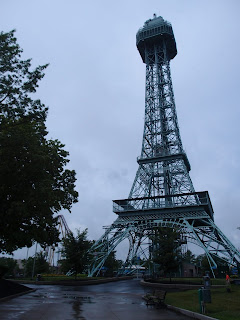 Orion is one of the few new roller coasters that have opened this year. It is the 10th tallest in the world at 287 feet with a 300-foot drop and a top speed of 91 miles per hour. Orion is a great ride and is one of my new favorite steel roller coasters! 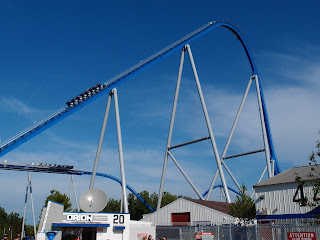 My dad took this picture from the Eiffel Tower. You can see Orion towering over the Racer, one of the rides that sparked a new interest in the wooden coasters and was famously featured in The Brady Bunch. 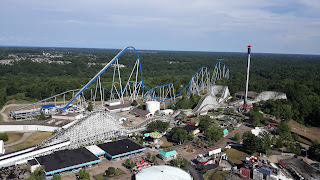 Any park with a working glockenspiel earns extra points. 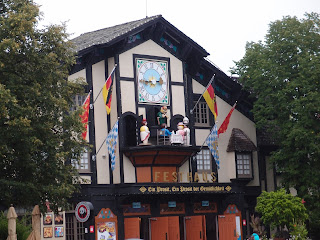 The park's darkride has always been in this building and has gone through several themes over the years, with the most recent being the "Scooby-Doo and the Haunted Mansion" interactive ride since 2003. It was altered into "Boo Blasters" when Cedar Fair took over. 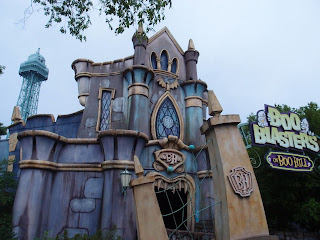 Seen here are three of the park's roller coasters: The Beast, the world's longest wooden coaster, is on the left, Diamondback, a hyper coaster, is in the right-center, and Mystic Timbers, a wooden coaster built in 2017, is on the far right. Also of note on the far left is the former site of Vortex, a looping coaster that closed at the end of 2019. I missed out! 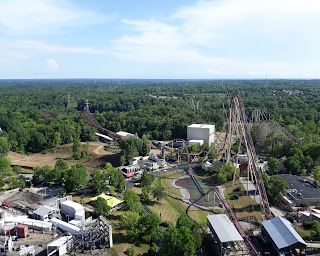 Mystic Timbers was majorly hyped up, but I went in with too high expectations because even after three rides I came away disappointed. The track is very twisted, but no matter how many crazy directional changes and pops of airtime this coaster throws at you, it’s a bit too smooth for me. I love wooden coasters, but those made by Great Coasters International that I’ve ridden just don’t have the edge that I look for in a woodie. 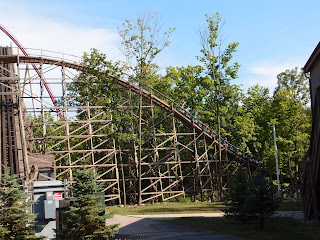 The Beast is about as legendary as it gets when it comes to wooden coasters. I was hoping I would love it but wasn't expecting much, and as I anticipated, it didn't have a lot of action over its long length. The thing that made the ride worthwhile was cruising through the woods, and it’s hard to imagine what this ride would be like without that feature. The final helix also did not disappoint and is definitely the most forcefully memorable one of any wooden coaster. 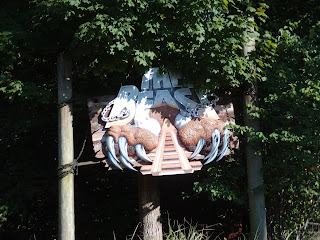 My first visit to Kings Island was lots of fun and gave me a perfect opportunity to take in all that the park had to offer. I look forward to returning in the future!