The Great Escape in Lake George, New York is a small park with a rich history. Debuting as Storytown USA in 1954, it claims to be one of the first theme parks ever opened in the United States. The brainchild of a prominent local man named Charles Wood, the park was renamed "The Great Escape" in 1983 to reflect its expanding offerings, which by that time included a Ghost Town and Jungleland area as well as major rides. Below is the historic heart of the park. 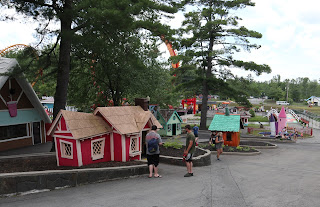 The Great Escape's most notable attraction was added in 1994. The Comet has a long history and was seen at the time of its opening as a victory in preservation, as it began its life at Crystal Beach Park in Ontario, Canada in 1948. However, its origins stretch back even further than that. 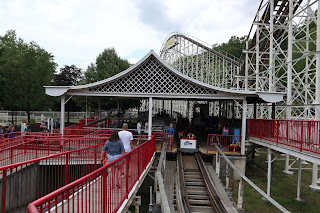 The Comet used much of the structural steel from the former Cyclone at Crystal Beach, which was known as one of the most intense coasters of all time, so much so that a nurse was often stationed at its exit. From its opening in 1927, the brutal Cyclone grew increasingly less popular and more difficult to maintain. The redesigned Comet was an economical way to add a new ride and became a local favorite. 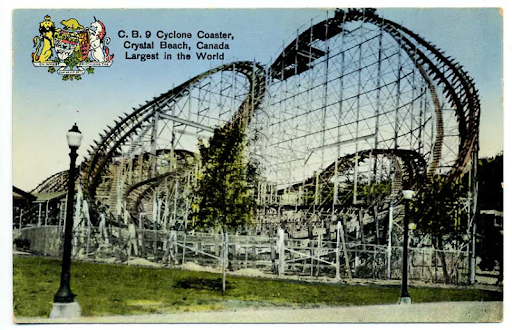 Crystal Beach closed in 1989, and everyone hoped that the Comet would find a new home. When Charlie Wood purchased it at auction, many breathed a sigh of relief. It would take several years, but the Comet finally opened at its new home in 1994. 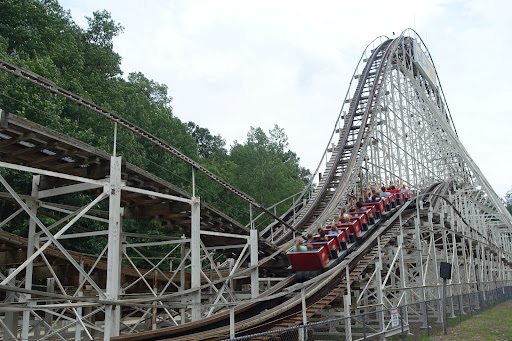 In 1996, the park was absorbed into the rapidly expanding Premier Parks, which purchased the massive chain of Six Flags parks two years later. Today, the Great Escape is one of three parks owned by Six Flags that does not use the Six Flags name. 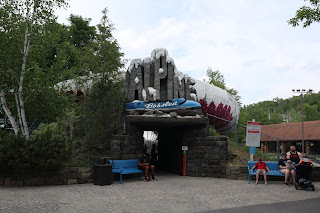 One of Premier's first additions to the park was the Alpine Bobsled, which has operated at two other Six Flags parks. It was one of two Intamin-designed bobsled coasters purchased by Six Flags in 1984. 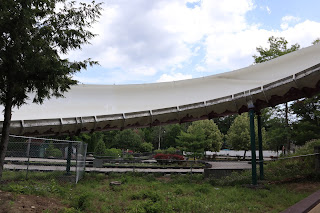 Of course, Bobsled coasters are always fun because the train is "free-wheeling" through a trough - I found this one to be a little bumpy, though. 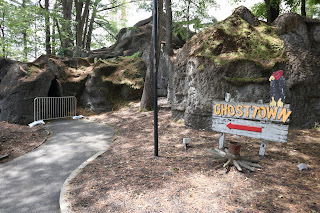 Ghost Town was added in 1957. You originally had to walk through a cave behind a waterfall to enter, though you can see that that was blocked off the day I visited due to construction near the other end. When it first opened, Ghost Town contained many small buildings and exhibits, but the area's charm has fallen victim to Six Flags, who replaced the classic Tornado darkride with the Canyon Blaster mine train coaster in 2003. 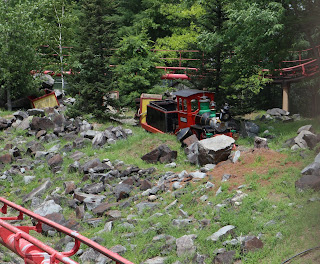 Also replaced by Canyon Blaster was the Ghost Town Railroad, which was reused as "theming." The park still has their other, original train ride, however. 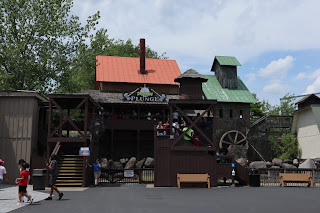 The Desperado Plunge flume uses the old boats from the Busch Gardens park in Van Nuys, CA, while the Steamin' Demon coaster was relocated from a park in Louisiana. 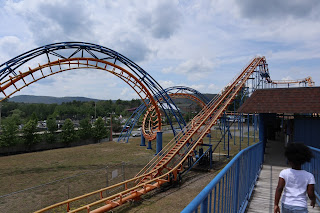 Although Six Flags erased some of the park's charm, Great Escape still has a much more pleasant, "country" atmosphere compared to other Six Flags parks, as it retains lots of trees. 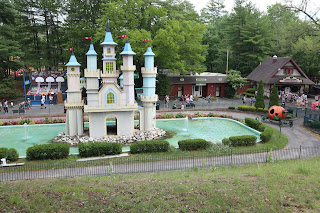 You can still find remnants of the park's Storytown beginnings in its center. The pumpkin coach around the castle used to be a unique attraction where children could ride with Cinderella, but now it's only used as a display piece. 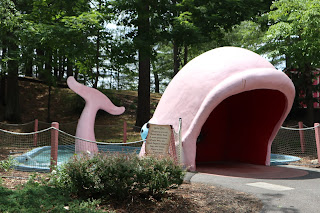 To the park's credit, they moved Moby Dick - one of the original Storytown displays - to a different area (though it was in storage for a time) after it was replaced by a Looney Tunes land in the early 2000s. 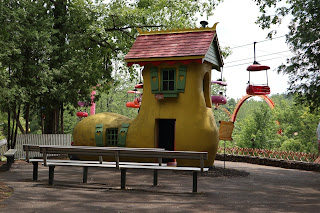 The Old Woman's Shoe House sits all by itself on a quiet hilltop. The Sky Ride in the background is a slow, round-trip. 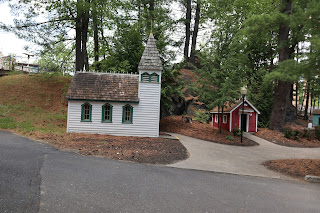 Arto Monaco was a famous local artist who built child-sized play buildings for Storytown USA and other parks in the Adirondacks, including his own, the Land of Make-Believe. 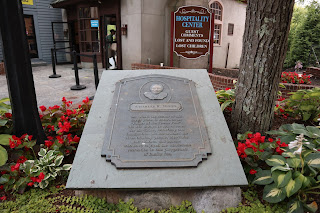 Charles Wood was known not only for his work in making Lake George a well-known tourist destination but also as a friend to the community with his prolific charitable work. A colorful character, Wood was inducted into the International Association of Amusement Parks' Hall of Fame in 1992.
I hope you enjoyed your tour of the Great Escape. Next post, we'll take a tour of the park's outdoor Alice in Wonderland walkthrough.
Posted by Andrew at 9:00 AM

A lot more open space than I'm used to seeing at a Six Flags park! It's so nice to see some of the older structures being kept and maintained; they give a park so much of its character.

The Crystal Beach connection reminds me of a story my mother used to tell. She broke a bone in her hand on a childhood visit there, and she said they had a fluoroscope machine right in the First Aid office.

It's cool that your mom got to go to Crystal Beach, Melissa... I'm guessing you didn't, though?

Funny you should mention the Tornado dark ride. When my youngest and I went to Cedar Point last month (note to self - I still owe Andrew a trip report), I was looking up the old Earthquake dark ride to explain it to him and Tornado came up in the search. I am amazed that that refugee from Freedomland lasted into the 21st Century considering Cedar Point closed Earthquake at the end of the ‘84 season and the Pirate Ride (the former Buccaneer) at the end of the ‘96 season. Now I’m curious if any dark rides from Freedomland survive today. If only there were some sort of research capability I could use at home…

Chuck, you're sharp picking up on the Tornado being from Freedomland! Between when it was there and at the Great Escape, it was at Kennywood, making it even more intriguing to me. Beyond a few props Cedar Point still has, there isn't much left from the Freedomland darkrides. Great Escape also got the mirror maze and the Mine Caverns ride, which they used in the tunnel on the Ghost Town Railroad. (For completion's sake, they bought Danny the Dragon and the historic carousel too.) One more fun fact is that the cars for the Earthquake and Tornado were switched when they were sold, so Cedar Point got the backboard carriages that were originally on Tornado. They made more sense with their respective rides at Freedomland, as the antique cars originally on Earthquake better captured 1900s San Francisco than the midwest. Yes, you do owe me a trip report! :-)

That abandoned Ghost Town Railroad car, reminds me of Disneyland's reuse of one of the Nature's Wonderland Mine Trains, along the Rivers of America.

Was one of the two Intamin bobsled rides manufactured in 1984, the Sarajevo Bobsled? I rode that at Six Flags Magic Mountain, when it was brand new. When I went back to the park a couple years later, the ride had already been removed.

I also rode the Ya-hoo Flume Ride at Busch Gardens in Van Nuys. I would love to be able to ride in those barrel-shaped boats again. I wonder how they are holding up, after nearly 50 years?

I'm so glad to see that this park has kept and preserved some of it's historic Storytown structures!

I'm glad you liked this post, TokyoMagic! The train instantly reminded me of the Nature's Wonderland train you mentioned. Yes, the other bobsled coaster was at Six Flags Magic Mountain! Both coasters were called Sarajevo Bobsled when they opened, and the one that was at Magic Mountain can now be ridden at Six Flags Over Texas. I wish I had ridden the flume, but as you can see, the line was long, and I only had a couple hours at this park.

No, I never made it to Crystal Beach before they closed. Many happy memories of Canada’s Wonderland, though.

Andrew, great post. Didn't know much of the history of the park but we did visit Storytown USA when we were kids in the 50s. We lived in NYC and it was a treat to go. It was a long drive and I remember the drive a little more than I remember the park. 1955-56, around there. We moved to Tucson at the end of 1956 and we stopped there on the way out, according to my sister.
Thanks for the memory. Hadn't thought of that place for, well, a long time.

It's amazing that you visited this park in one of its first years of existence, DrGoat. I'm guessing that was before you had been to Disneyland. Thanks for sharing that great memory.

A "free-wheeling" Bobsled coaster - HOW COOL IS THAT! Something I've never experienced, but it sure looks like fun!

I bet that the original Ghost Town was fun to explore. Too bad it's lost it's charm, as you said.

I love that Moby Dick!

Thanks, Andrew, for all these terrific pictures and info on this historic park!

Sue, the Alpine Bobsled was fine, but Flying Turns at Knoebels is by far the best bobsled coaster out there. It's built of wood, and it took the park six years to build and perfect the ride. They were determined. I'm glad you liked the post!