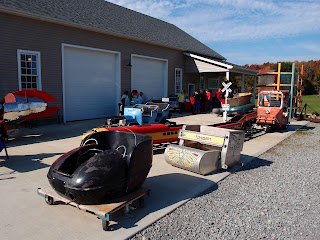 In Youngstown, Ohio is a small, homespun museum dedicated to the city's old amusement park. Idora Park operated 1899-1983, and although the park is long gone, a couple has preserved some old artifacts from it in a building behind their home. Let's take a quick look around! 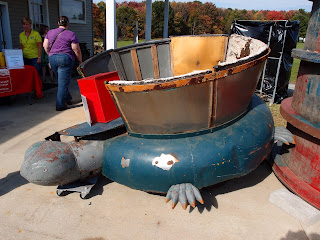 Here's a car from the park's old Tumble Bug ride. I understand that it's completely been refurbished by a local technical school since this picture was taken in 2016. 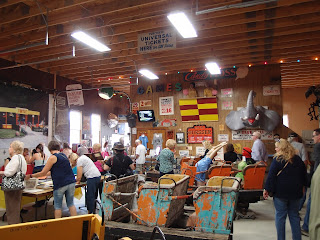 Since the museum is only open about two times a year, a good turnout is to be expected. 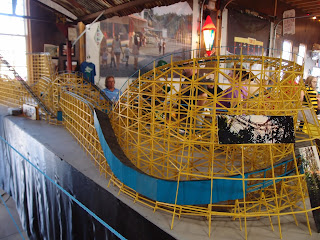 One of the most striking features inside is this model of Idora's biggest roller coaster, the Wildcat. It burned during the off-season before the 1983 summer, which ended up being a major factor in the park's demise. 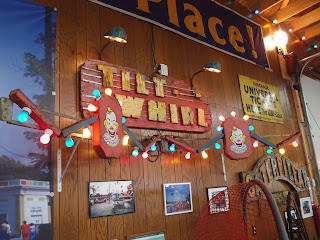 Of course, the park had a Tilt-A-Whirl, and one of the old cages is backed by the original sign and some of the decorative work. I hope you enjoyed this post!

The site of the old park remains today. We'll be taking a look at that sometime in the future.

So cool to see the Eyerly Spider and Eli-Bridge Scrambler ride units. The Scrambler car is in it's original silver with the Eli-Bridge graphics too. I love it!

That Tilt-A-Whirl sign is really awesome! I love seeing the original color schemes of the classic flat rides. What a wonderful museum and so much to look at. Thanks, Andrew.

Yes, and many of the cars have been painstakingly restored.

Totally unrelated, but I've always liked the design of Spider sears - I think it's cool how they fold down.

Wow, so amazing that somebody had the foresight (and the money and space) to preserve these relics. It seems odd that it's only open twice a year, but I'm sure it's a lot of effort for the owners.

Yeah, try opening a museum in YOUR garage! All those cars need to be parked, too.

I love the Spider cars and how the seats fold down. I rode The Spider at Castle Amusement Park in Riverside, California a couple of years ago and still loved it. I also remember riding the early Eyerly Octopus as a very young child. I think both designs are classic.

It makes me happy to see people care so much about a park which no longer exists, and also to know that they are preserving the memory of it!

I think this would be fun to see, for sure.

The comment tool seems to work for now, but I still have make a REPLY which vanishes before I can comment. I don't care.

I would want to tour this with the group though, I would need Ken and Andrew to tell me what I am seeing.

Thanks for putting up with it; I'll have to see if there's any way I can make it better.

By the way, I just tested it out, and the Preview button works on desktop for me, just not on any mobile device. Weird.

Ha-ha, people never seem to believe that a kid like me would know that much about this kind of stuff.